The late French conceptual artist Christian Boltanski once said, “Making art is not about telling the truth but about making the truth felt”. Gozitan artist Mario Agius attempts to explore this concept by adopting traditional sculptural methods and using conventional materials such as wood and limestone. He cuts out the abstract tree branch or stone block, trying to tone down the shape and volume. Thus, he embodies his abstract thought through figuration. He is looking for a truth, however relative it may be, because, under the sun, there is nothing absolutely truthful.

The choice of Il-Ħajja (Life) because the title of his current exhibition ‒ the use of the definite article being restrictively suggestive ‒ is indicative of an artist in tune with himself, his environment and life as it happens. For inspiration, he draws on the biblical, spiritual and redeeming factors of humanity. In these times of faithless strife, Agius carves these prayers, these thought-provoking peace offerings.

He then continued his studies in Cheltenham, England, under British sculptor Ian Norbury, who was instrumental in expanding the versatility of the Gozitan sculptor. Enrst Barlach, the German expressionist sculptor, was one of the main inspirations for the British artist and it was also to influence the student Agius.

L-Imħabba sa l-Aħħar (love till the end) is a poignant depiction of marital love. Although Barlach (1870-1938) can be considered an influence on Agius, the Gozitan artist did not anchor the primitive expressionist angst in the narrative. Another kind of pain, physical pain, troubles man and woman; however, there is a resigned harmony in the comfort of company, in the knowledge of going through whatever life chooses to throw at it, despite sickness and old age.

Unconditional love is in the act of walking together, while using each other as crutches. The rurality of their clothing could indicate life in a Gozitan village – one can still encounter those pockets of tradition that have not yet been overwhelmed by progress. 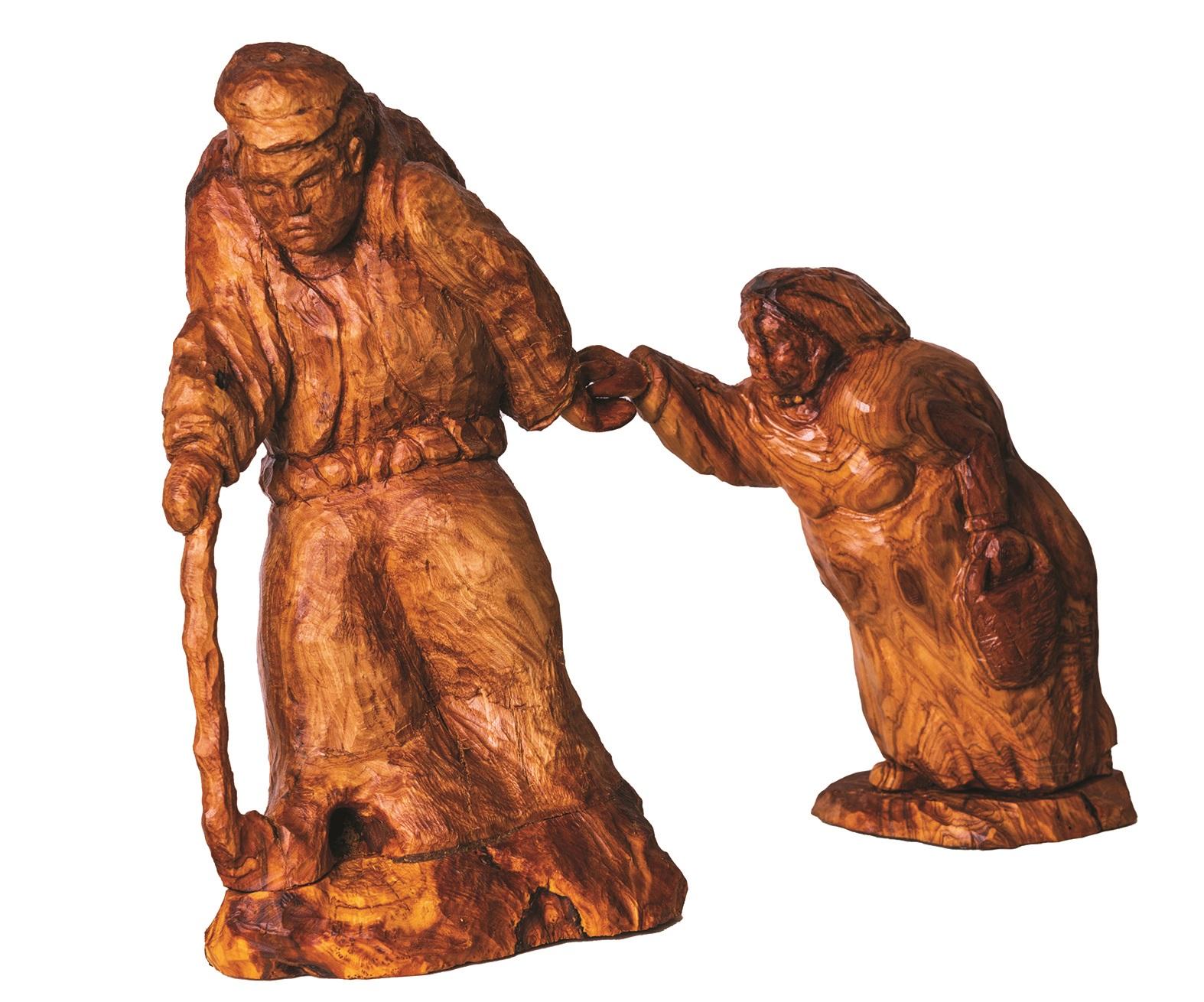 Mistrieħ (Rest) is a totemic study of paternal love, the young boy carried on his father’s shoulders, who stands firm but rather weary under the weight of his son. The weight of his age weighs on him as he tries to catch his breath before continuing their route.

He embodies his abstract thought through figuration

The young boy seems to be looking towards adventure, not caring too much about the pitfalls that could cause his father to falter and fall. He urges his father to keep moving forward, while holding on to the lead. The title likely refers to the hesitant moment when the man needs a moment to recalibrate and rest, even though he wouldn’t want to curb his son’s exuberance.

Saints and other biblical characters

The sculpture of Saint Francis, titled san francisco, is a celebration of moral rectitude and humility. The brother, founder of the Order of Friars Minor, denounced the wealth of his family in favor of an ascetic life dedicated to deep spirituality and poverty. Agius captures the resigned humility and patience of the patron saint of animals and nature. The two birds, possibly doves, represent God’s creation, delivering a message that the saint and his two avian companions belong to an integrated harmonious whole. 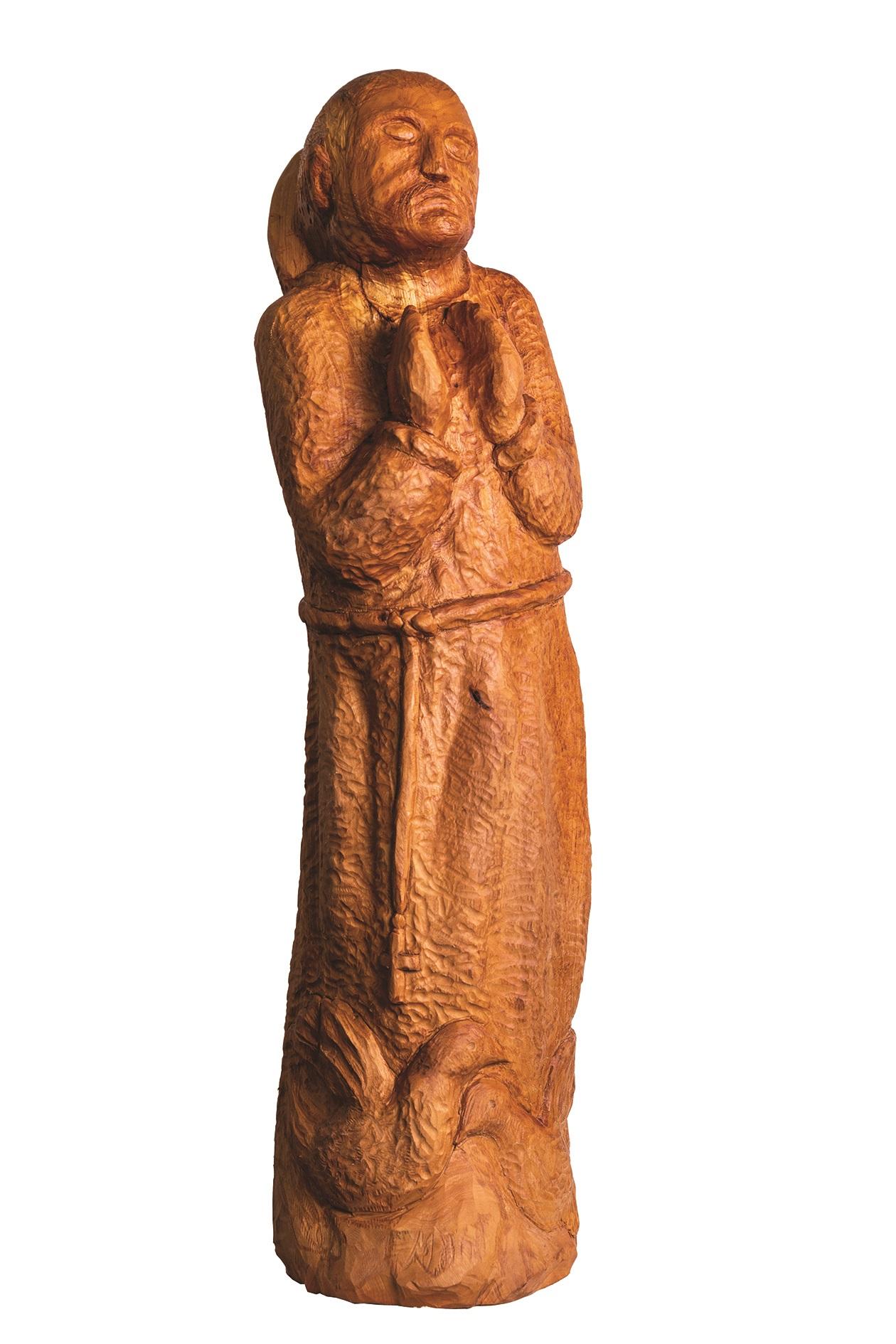 The totemic composition symbolizes the strong connection between the saint and God’s creation, and this universal harmony can only be achieved when man becomes one with his natural environment. Mankind in recent decades has trampled it under foot, defiling and exploiting God’s creation in the most despicable way. The artist, through this sculpture, also reflects on the visit of Pope Francis to our islands a few weeks ago and his message in favor of the world’s natural heritage and even of our own country.

Saint Paul is believed to have introduced Christianity to our archipelago. the sculpture of Agius, San Pawlbegan life as a piece of weathered Globigerina limestone, a LOST AND FOUND, recovered by the artist in a field in Gozo. Natural erosion had sculpted it into curls and swirls, somewhat indicating a path for the chisel to follow as the artist sculpted the face and incorporated weathering like a full, curled beard and unruly hair. 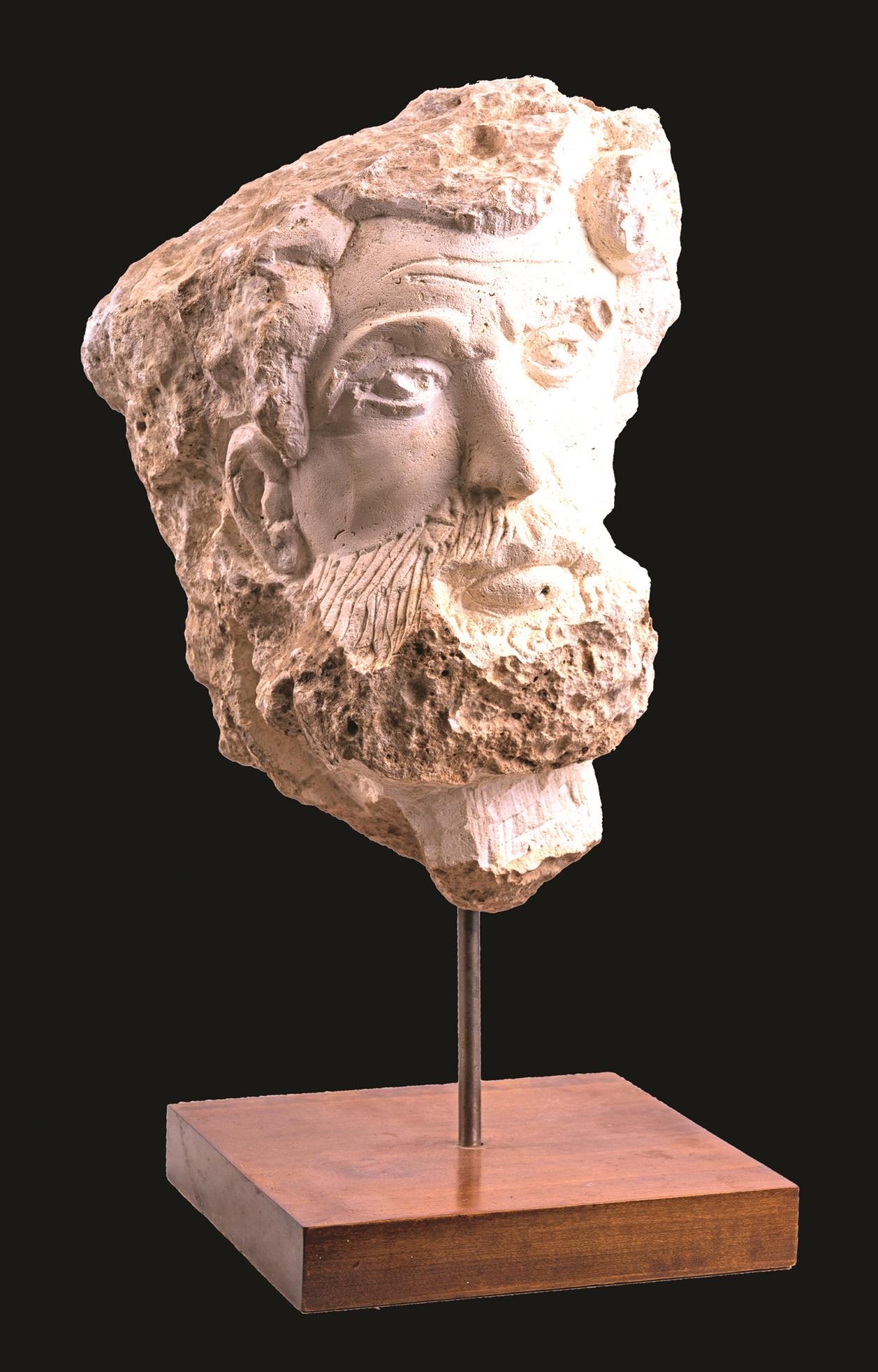 The Melchiorre Cafà masterpiece of Saint Paul, one of our country’s greatest artistic treasures, also a highly venerated processional statue, shares the same stern gaze and wrinkled forehead. This collaboration of art and erosion adds another iconographic layer and San Pawl blurs the lines between art and archeology as there is disagreement as to whether it is indeed a work of contemporary art or an artefact extracted from an archaeological site. Natural erosion, the patina of centuries, adds to the timeless dignity of the piece.

Eva (Eve) is a study in shame and humiliation. Agius clings to the Genesis episode of the Old Testament banishment from the Garden of Eden, as punishment for tasting the forbidden fruit that caused them to lose their innocence as their eyes were opened to knowledge and to sin. 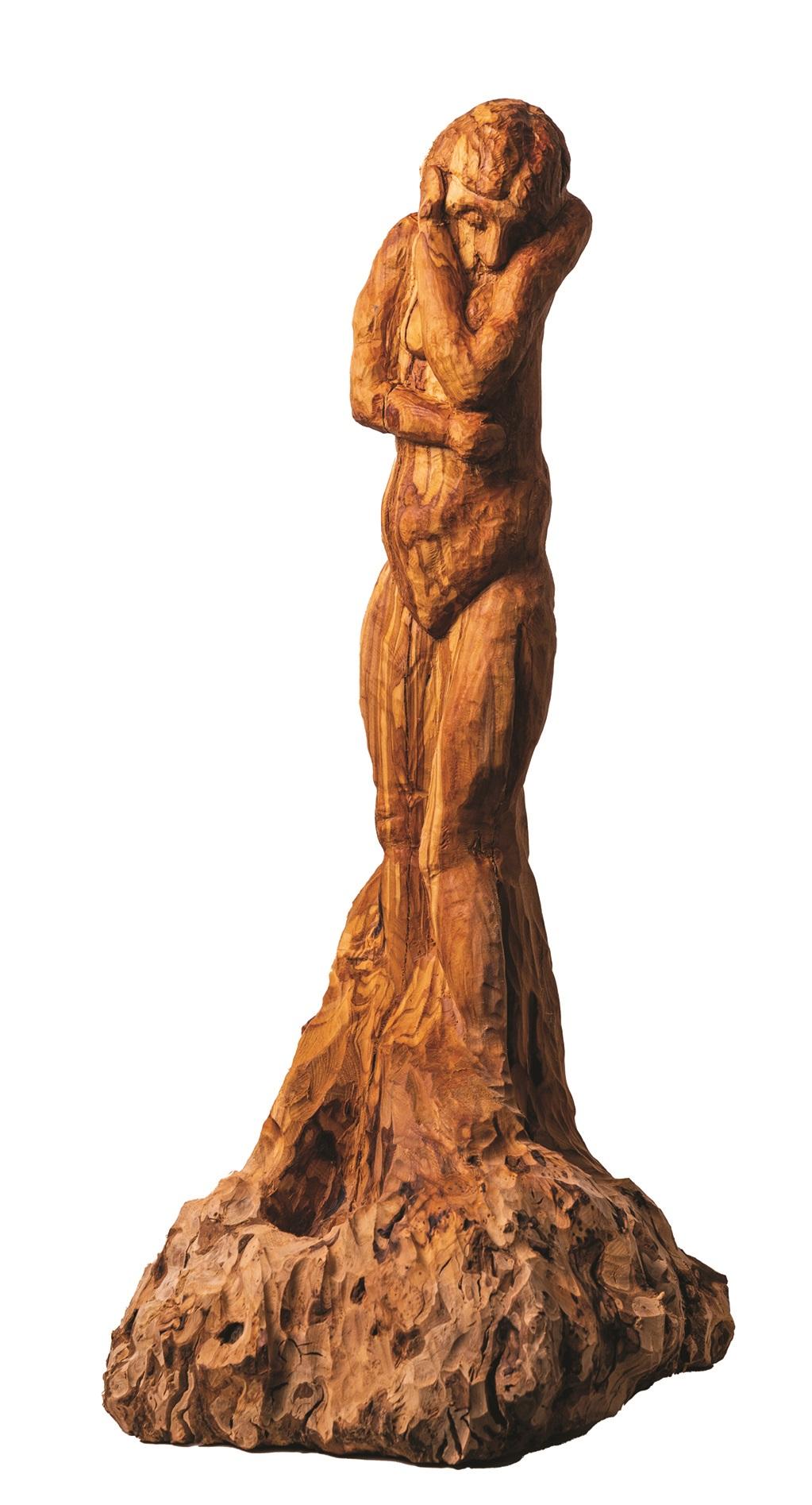 The penitent and shy Eve, consumed by her loneliness, all the more raw because Agius depicted her without her companion Adam, is rooted to the ground, threatening to engulf her in a wooden column. Enslaved by the sin she had just committed, this recalls the fate of Lot’s wife, transformed into a pillar of salt for having transgressed another divine commandment, as recounted in the same first book of the Pentateuch.

Il-Ħajja demonstrates once again the consummate skill and dexterity of Mario Agius in the traditional sculptural medium, breathing life into inanimate tree trunks and blocks of stone. The title of this solo exhibition was eloquently chosen for its meaning on many levels.

Il-Ħajja, curated by Elyse Tonna and hosted by the Malta Society of Arts, Palazzo de la Salle, Republic Street, Valletta, is open until 19 May. The opening hours are as follows: Sundays and public holidays: closed. You can meet the artist on May 14 between 10 a.m. and 1:30 p.m.

Independent journalism costs money. Support Times of Malta for the price of a coffee.