My weekend routine lately has involved occasional visits to the many art galleries that dot the bustling and scenic heritage areas of south Mumbai. Lately, however, what was once a leisurely walking pace with a sunny stroll up and down Marine Drive has turned into a brisk walk as galleries do their best to cater to the many art lovers and enthusiasts and I try to touch them all before they change exposure.

Last week (the weekend of February 12-13), galleries came together to host “Mumbai Gallery Weekend”, a four-day event full of new and exciting exhibitions by prodigious artists. Many galleries that are normally closed on Sundays remained open, and they all posted copiously on their respective social media as visitors continued to pour in, impressed by the posted fare.

On a busy day, our own art walk began with a visit to Chemould-Prescott Road, a spacious and open space in a particularly beautiful location, which hosts a breathtaking exhibition titled “Cosmos” by artist Desmond Lazaro. I happened to have just seen a cosmic spectacle in another medium – the popcorn multiplex theatre. Roland Emmerich’s latest apocalyptic thriller ‘Moonfall’ isn’t something one would normally compare to art, but themes of space, spirals and orbits were prevalent in both.

Movie comparisons aside, Lazaro’s “Cosmos” is a jaw-dropping spectacle, blending elements of architecture, Indian and Western astronomy, pre-Galilee cosmology, and an alchemical vision of color. The artist, too, is cut from a similar fabric, his sketchbooks and sketches vaguely Da Vinci-an. 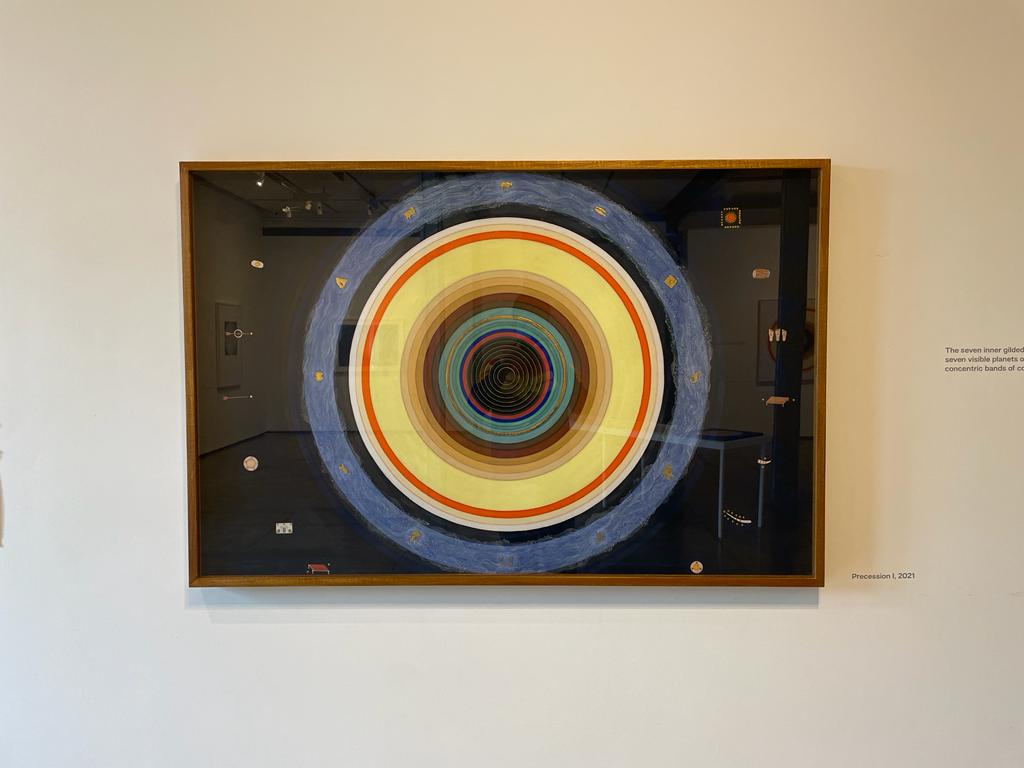 Lazaro references a labyrinth structure in an old French cathedral, superimposes the orbits of an Earth-centered solar system, then divides the circles into quadrants featuring well-known constellations. The artwork is solid in color, steeped in an 18th and 19th century history of exploration, and grand in celestial scale. The artist and staff at Chemould Prescott Road were also happy to chat – all in all an exhilarating experience. 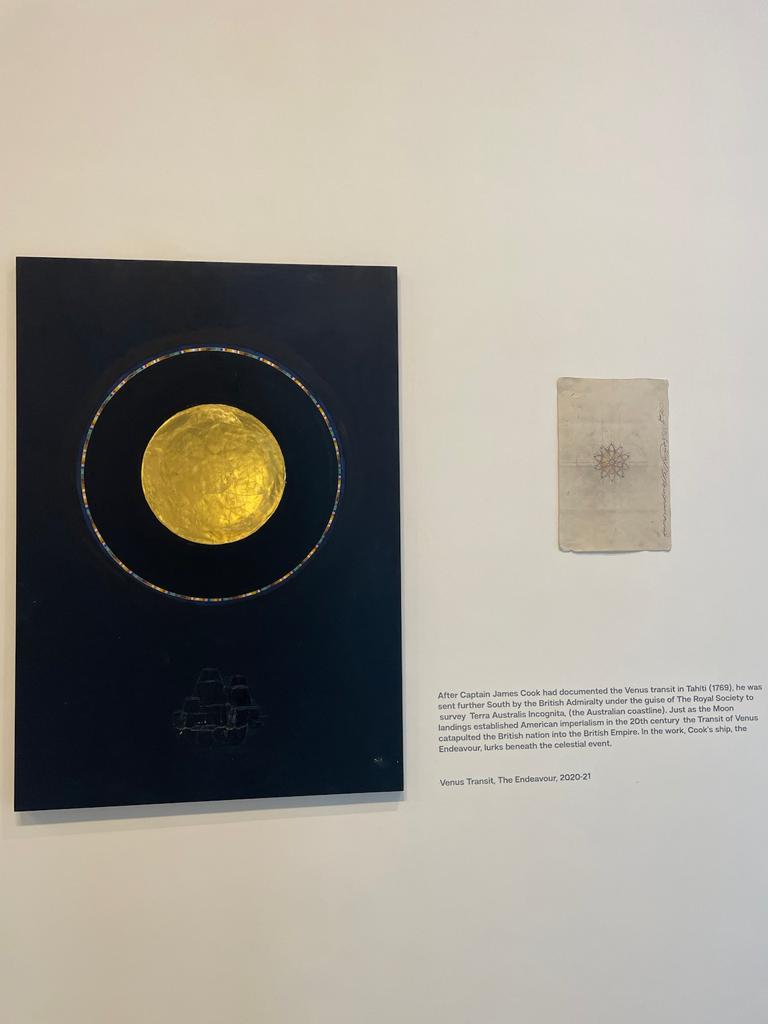 The next gallery on the list, not far away, was equally multi-dimensional – “Information Architecture” by Kunel Gaur at Method. In this corner space on two floors, brands, labels and barcodes come together to give the impression of the interior of a rocket. The robo-punk themes are written big with the gallery’s techno music theme also adding to the experience. 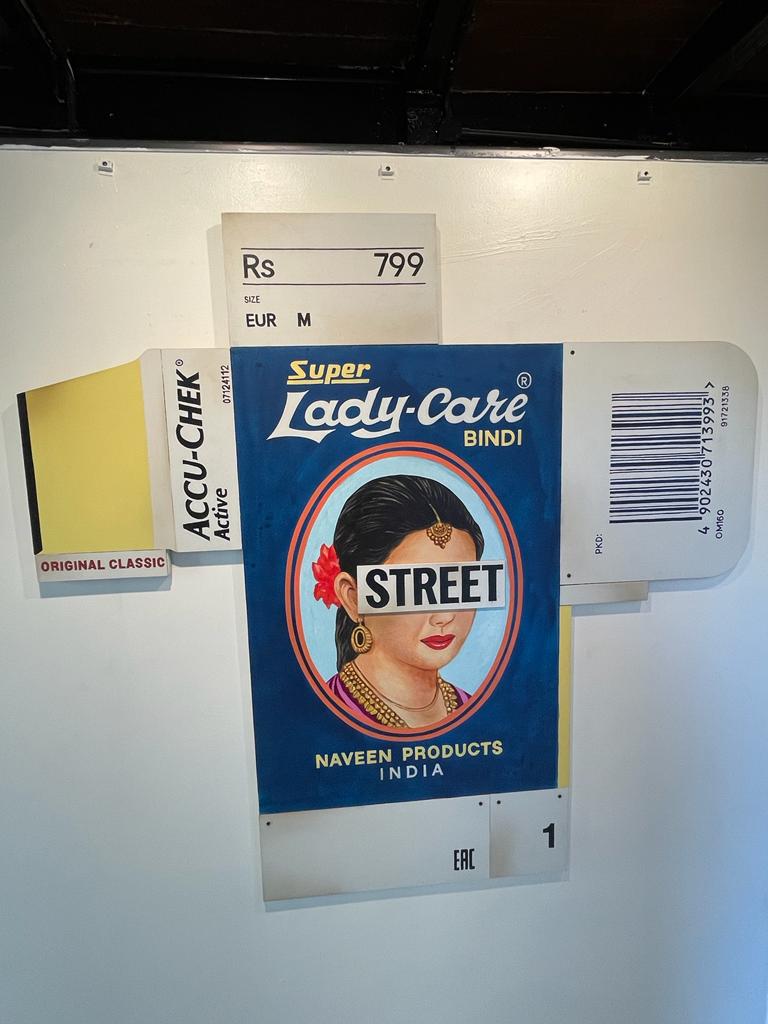 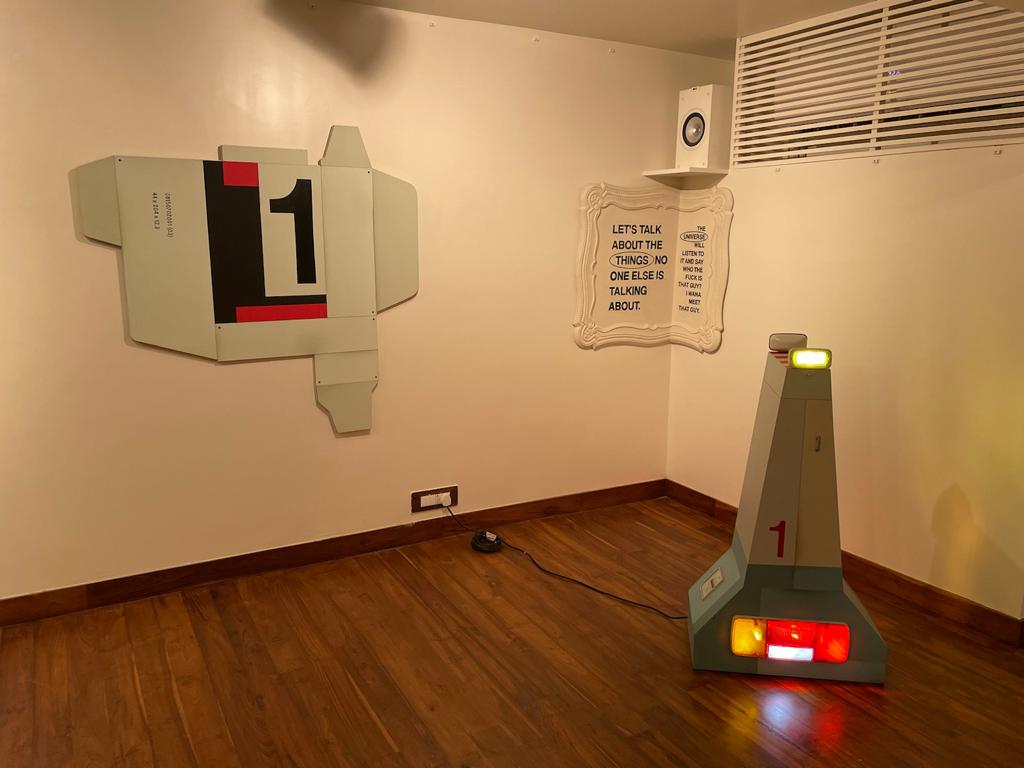 After a special Sunday lunch of Kerala banana leaves at one of Malabar’s many restaurants, I was on my way to Colaba. Jehangir Art Gallery had once again changed its entire range, although nothing particularly stood out, and we had been to Tarq & Gallery Mirchandani-Steinreucke the previous weekend, so the next destination was the gallery Chatterjee and Lal.

Breaking with the norm of presenting paintings, this gallery was showing a short film. Trinity, by Hetain Patel, is a 23-minute Gujarati-language third part (English subtitles) of a trilogy in which the main character – an angsty Gujarati NRI girl of marriageable age sets out to discover a ” physical combat language. It’s well-acted, though perhaps a bit avant-garde even for its setting, and certainly very “art movie” in its tone and tenor. Themes include independence, experimentation, societal pressures on Indian women (even those born and raised overseas), emancipation and more.

A trio of hardcore art galleries followed. AT Project 88 which is well south of Colaba Causeway, the exhibit is called ‘Tropisms’ by Amitesh Shrivastava. The colors are reminiscent of seaweed, as are certain subjects. In this humid, foliage-filled world, the artist depicts a surreal swamp filled with humans riding frogs and waterfowl. 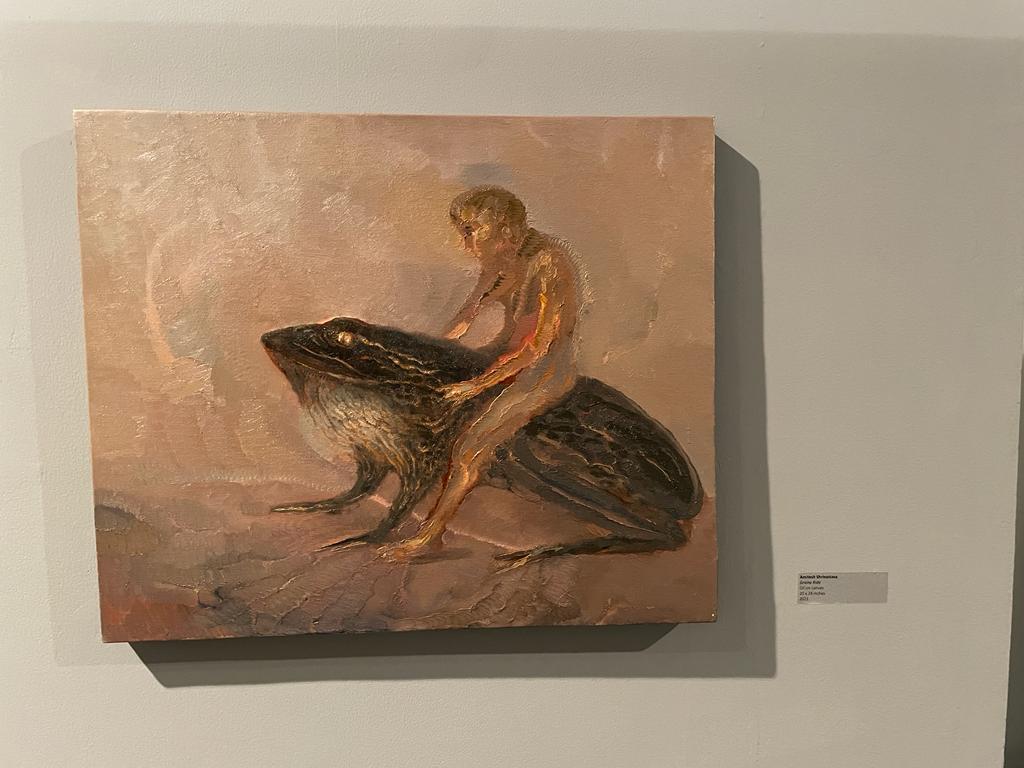 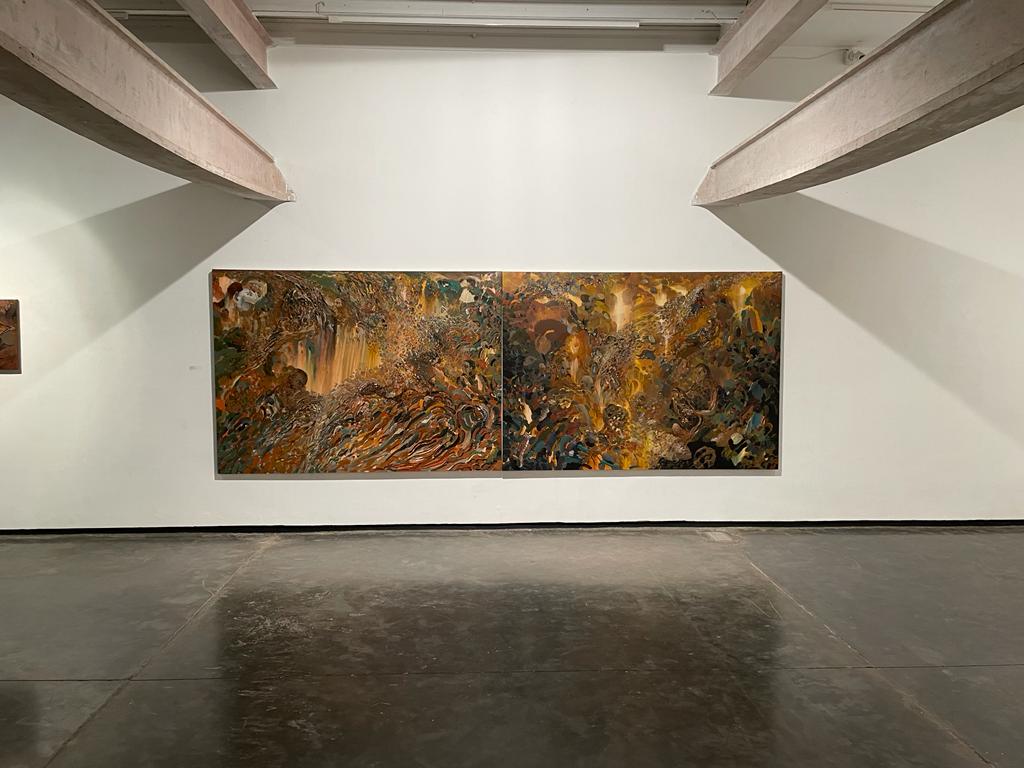 Not far away are the two neighboring galleries – Sakshi Gallery and Gallery Maskara. Sakshi Gallery had an absolutely bizarre and tearful exhibit called “Con-Contemporary” by Siddhartha Kararwal where nothing is what it seems and everything is a non-sequitur. Chandeliers are made of bananas, Garfield melts, Camels ride planes, World leaders [sic] play Chinese Whisper, and the old Cupids play tug of war for Pizza in the sky. This absurdity is compounded by the placement of outlandish chimerical stuffed toys, including a totally over-the-top one that is actually a centipede animal. The colors are beautiful, however, and the overall effect is bound to awe viewers. 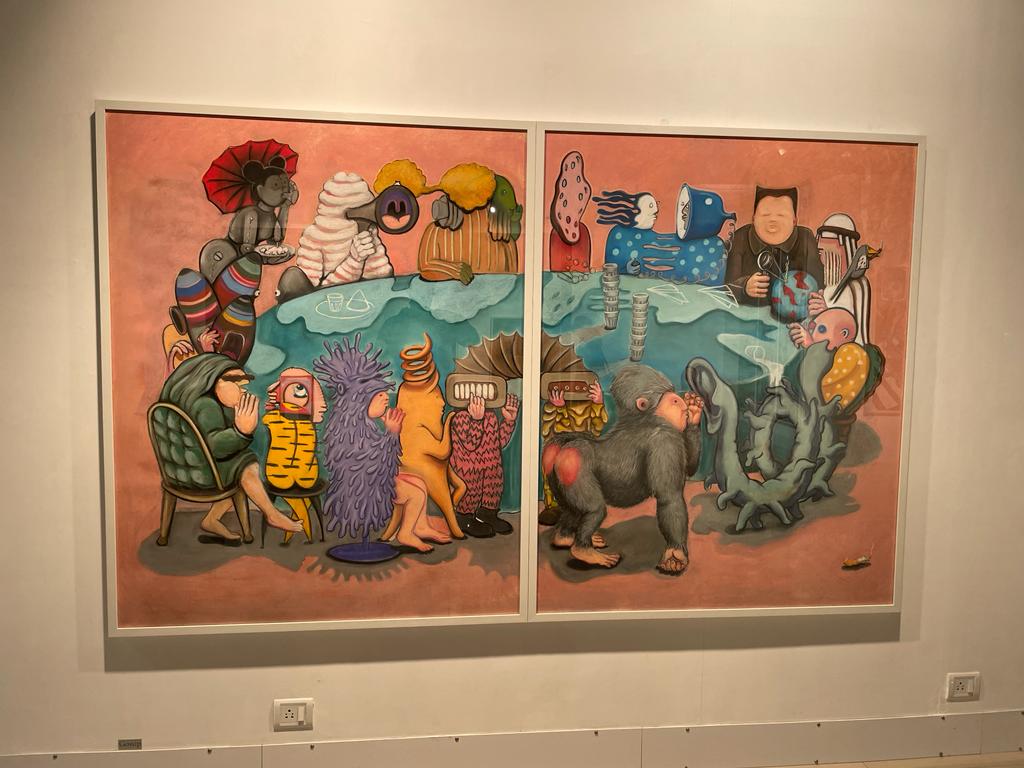 If the Sakshi Gallery impresses with its quirks, Maskara Gallery shocks with an explicit larger-than-life (for lack of a better word) “charcoal” that, nonetheless, is deeply significant (once the curator explains and understates what is on display.) Be warned, this one is not not one for the faint hearted and no one should feel prudish for feeling uncomfortable.

After that, there was just enough time to visit the Goethe-Institut Max Mueller Bhavan en route to watch Kenneth Branagh’s ‘Death On The Nile’, the sequel to the Hercule Poirot murder mystery ‘Murder On The Orient Express’ based on the books by Agatha Christie. The German cultural institute presents a collaboration of 10 artists on the effect of climate change on the Earth, something that we feel future art will increasingly focus on in times to come.

It was appropriate, I thought, as I walked into the cinema. I started the day with a film about the end of the world and ended my art walk with a gallery about essentially the same thing but in a dark and depressing way. Luckily for me, I had a delicious, old-fashioned murder mystery to distract me from the cataclysmic questions…until the Republic World app notification about skyrocketing tensions between Russia and Ukraine and the impending possibility of World War III snaps me out of my flamboyant art-deco reverie. Until next time… Armageddon notwithstanding.