During the Italian Renaissance, painters and sculptors discovered a renewed interest in classical ideals and naturalism. Famous artists like Leonardo da Vinci and Michelangelo created exquisite works of art that celebrated the human form. However, not all of the arts of this period pursued these ideals. There was another side to the Renaissance that was fascinated by depictions of the strange. This niche is best illustrated in the fanciful portraits of Giuseppe Arcimboldo.

A longtime court painter of the Holy Roman Empire, he created many portraits of nobles and other notable figures using an assemblage of fruits, vegetables and objects. This offbeat approach was not only meant to be fun, but also to hint at deeper qualities of the sitter or the person to whom these works were presented – who, in most cases, was the Habsburg Emperor. . Today, these paintings are celebrated for their clever use of different components to create silhouettes that look believable from afar and much more abstract up close.

Scroll down to learn more about the artist and the meaning of some of his famous assemblage paintings.

Who is Giuseppe Arcimboldo? 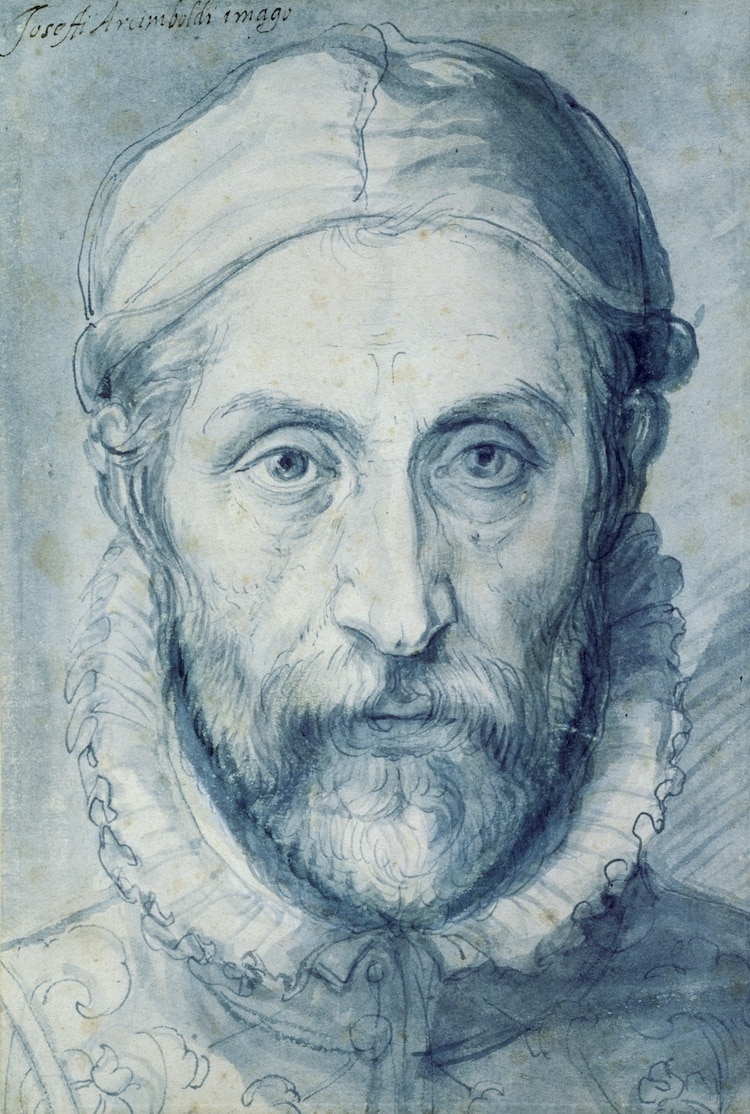 Giuseppe Arcimboldo (1527 – 1593) was a 16th-century Italian Renaissance artist, best known for his portrait assemblages. Originally from Milan, he spent most of his early years working on designs for tapestries, stained glass and frescoes for local churches. Later, when the artist was 36, he became a court portrait painter to Holy Roman Emperor Maximilian II and settled in Vienna, Austria. There, Arcimboldo was surrounded by scholars of different disciplines, including scientists, physicians, and astronomers; he felt free to experiment in his art. Although he also produced conventional portraits of the emperor and his family, they were mostly overshadowed by his fanciful cornucopias.

the assemblage of portraits used fruit, flowers, and sometimes objects (like books) to create a humorous depiction of the subject. While many of these plays subtly poked fun at the person they are based on – most of whom were wealthy nobles and royalty – they also served another purpose. During the Renaissance, there was a niche for paintings that captured an element of the weird, which was considered entertaining to watch. 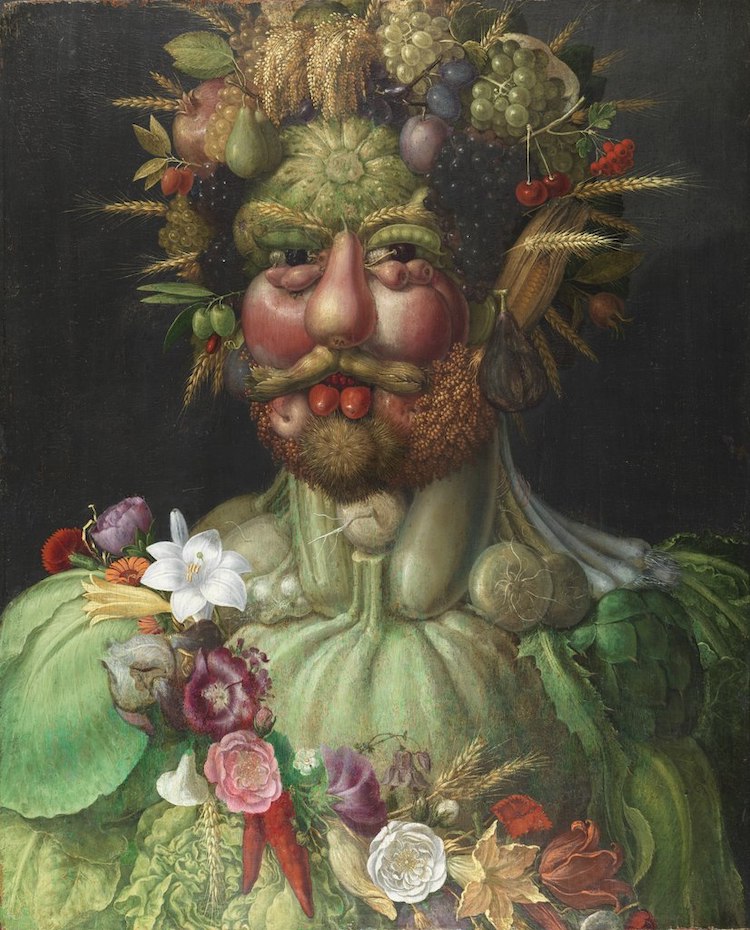 Established 1591, Vertumnus is Arcimboldo’s best-known painting and is considered his magnum opus. It was commissioned by Holy Roman Emperor Rudolf II and depicts the king himself as a compilation of fruits, vegetables and flowers. The choice of objects alludes to the Roman god of the seasons, of change, of plant life, called Vertumnus.

Although the painting looks humorous, it also has a deeper meaning. The choice of fruits and vegetables was intended to reflect the transformative political powers of Rudolf II and his balance between nature, art and science. 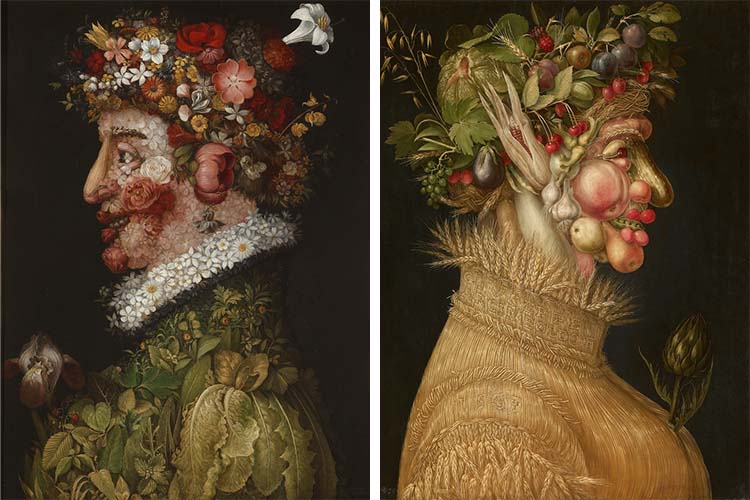 The four Seasons is a series of four portraits inspired by spring, summer, autumn and fall. They were made between 1563 and 1572 for Emperor Maximilian II and presented alongside Arcimboldo’s other series, The four elements. Each piece reflects a season with a unique arrangement.

Springfor example, represents the profile of a woman entirely composed of different varieties of flowers. summer presents fruits, vegetables and straw to create the portrait of another woman. Autumn, on the other hand, is a man built with seasonal fruits like apples and pars, as well as nuts, leaves, and wood. At last, Winter is another male portrait – this one uses a tree trunk, leaves, a lemon and an orange, which are winter fruits. 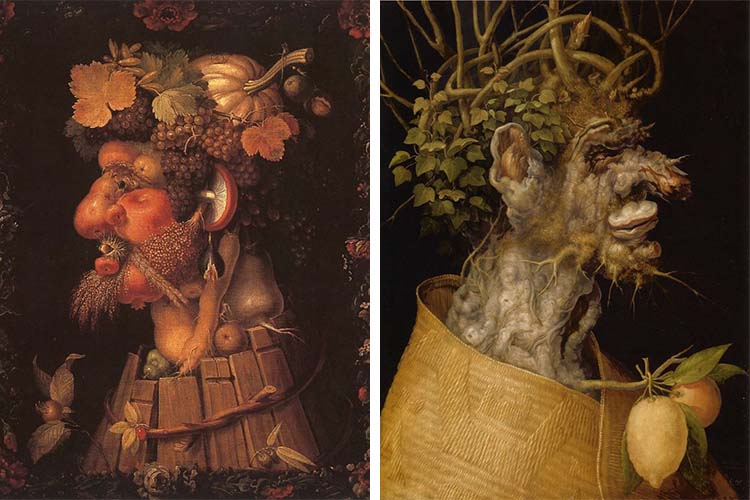 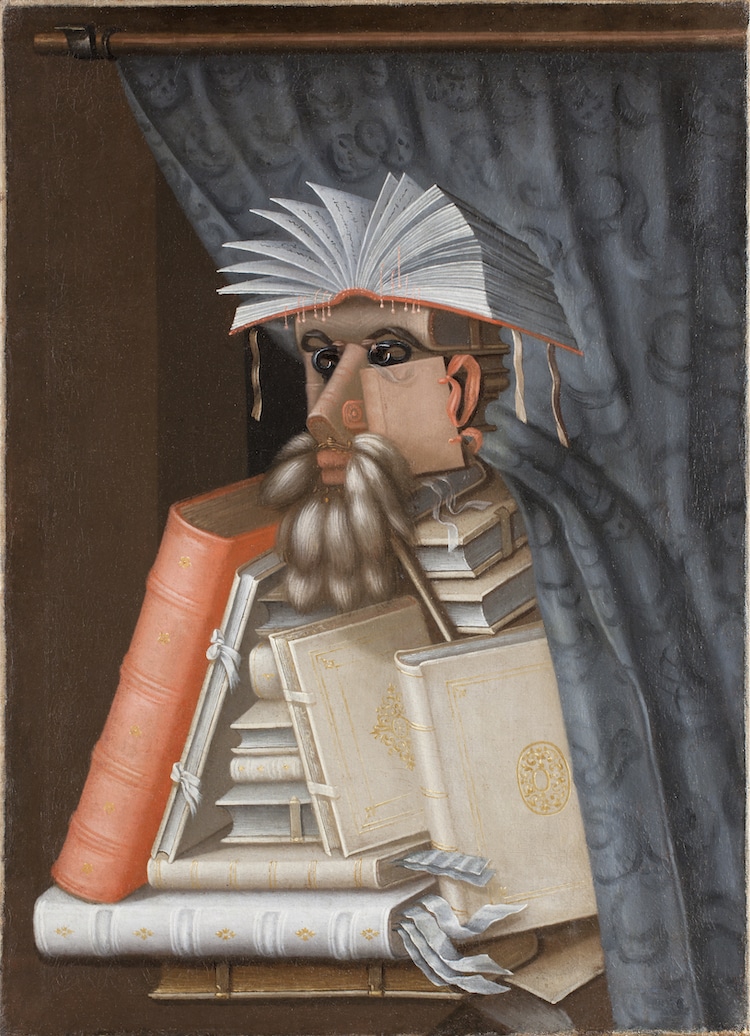 It is believed that Arcimboldo created The Librarian circa 1566, and he based the figure on a humanist and historian named Wolfgang Lazius. Instead of fruits or vegetables, Arcimboldo references the character’s occupation by creating a well-placed stack of books.

Most interpretations of this painting view it as a satire of scholars who focus on the material nature of books and not the content. It is also possible that the painting is not a mockery, but rather a celebration of those in the profession. 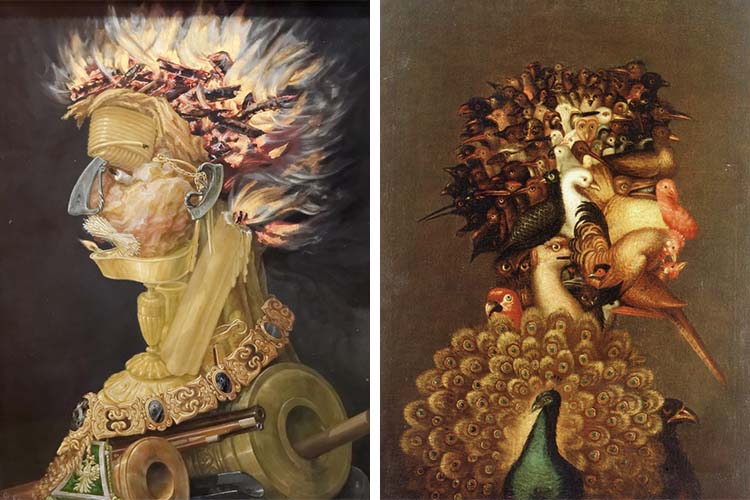 Created in 1566, The four elements is the other famous series of portraits by Arcimboldo made for Maximilian II. In this set, he represented each of the four elements using animals and objects. When these paintings were created, the artist was living at the court of the Holy Roman Empire in Prague and had access to the many varieties of wild animals kept in the city for research purposes.

Air, for example, uses many birds, including a peacock, pheasant, duck, and eagle, to create the portrait of a young male figure. Also, The water, is an assembly of dozens of aquatic creatures, such as fish, a turtle, an octopus and a crab. Together they create a silhouette of a female figure. Earth is one of the most ambitious paintings in the series and features several land animals, which are superimposed in the shape of a face. Fire, on the other hand, is the only work in this series that features objects and not animals. Inside the bust of the subject burns wood, flint, steel, guns and cannons. The theme of the arsenal is linked to the war between the Habsburgs and the Ottoman Empire. 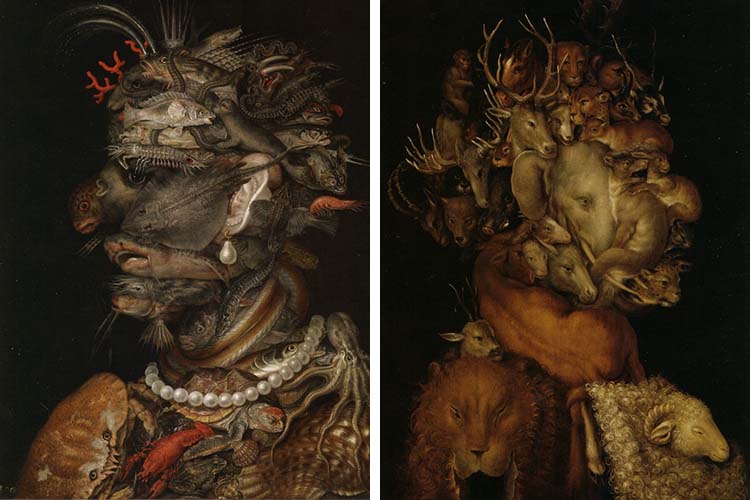 How the Lesser-Known Venetian School Flourished During the Italian Renaissance

Sandro Botticelli: the Renaissance artist who became the master of mythological scenes

Exploration of “The Lady with an Ermine”, an often-forgotten Renaissance portrait of Leonardo da Vinci