Opening the door to the Hall Art Foundation’s former cowshed in Reading, a visitor is confronted with – there is no other word for it – ‘An Arrest’, an unframed 10ft canvas by almost 12 feet suspended from grommets. The artist, Leon Golub (1922-2004), drew his subject from a newspaper photograph of the arrest of Northern Irish politician John Hume by a British soldier in 1971, during the Troubles.

But Golub, painting in 1990, reworked the image into the arrest of a black man at the hands of a leering white man. The latter holds a gun to the head of his victim with the spread eagle while pressing against his back in a position that threatens sexual violence. The terrified face of a third person, also black, observes the action in the bottom left of the painting.

It is difficult to distinguish these larger-than-life figures from the room in which they are depicted: both are painted in highly textured, mostly ashy hues, as if the violence is simply part of the lived environment.

Visitors who follow the chronological journey of the exhibition, from the post barn to the horse stable to the cow barn, have been given plenty of preparation for “An Arrest” in the form of past works. of the artist. Yet, like school shootings, every instance of violence in Golub’s work comes as a shock.

“Leon Golub” is one of two exhibitions at the Hall this season. The foundation, under the direction of Maryse Brand, curated the exhibition to reveal Golub’s progression – a decades-long exploration of the abuse of male power – into 67 works dating from 1947 to 2003. About a third of the works are on loan from Ulrich Meyer and Harriet Horwitz Meyer Collection in Golub’s native Chicago. The rest was collected by Andy and Christine Hall, whose collection Hall draws on, as well as the foundation’s own collection, as sources for its shows.

“There’s hardly any place where huge types of violence haven’t happened or aren’t going to happen or are happening right now,” Golub said, according to an introductory panel. (Apart from these panels, all artwork labels can be accessed via QR codes, which also connect viewers to additional information about select paintings and media images from Golub’s extensive file collection.)

Golub’s grim focus on violence was counterbalanced during his lifetime by his wife of nearly 50 years, artist Nancy Spero (1926-2009), whose work spoke to the feminist movement and celebrated women’s gains. . The couple share a studio, collaborate and often exhibit together.

At the Hall, Golub is undiluted, and the artist’s biography becomes a key to understanding his deep dive into portraying violence committed by men. 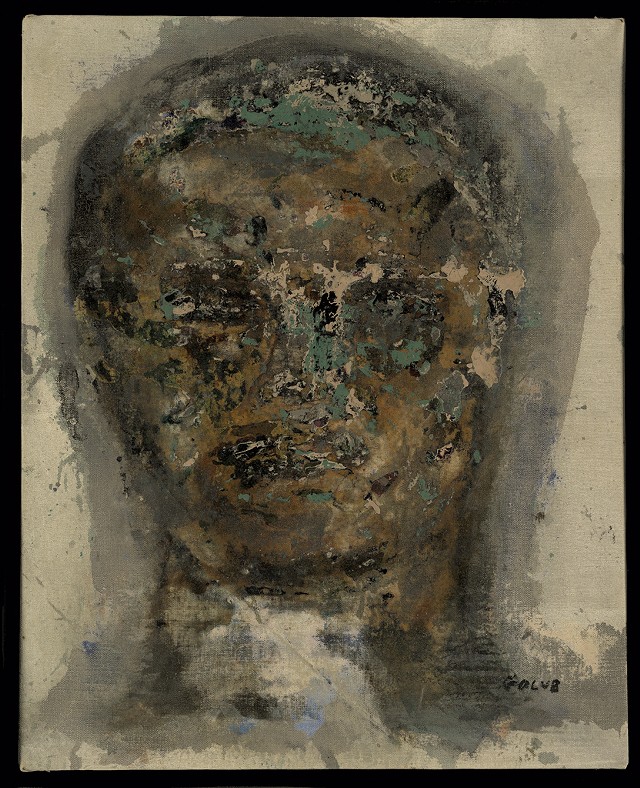 Golub was the son of Jewish immigrants from Ukraine and Lithuania. A first encounter with Picasso’s “Guernica” in 1939 gave him the idea of ​​becoming an artist, although he began by obtaining his bachelor’s degree in art history at the University of Chicago in 1942. As As a cartographer during the war, Golub encountered “first-hand witnesses and photographic evidence” of Nazi death camps, according to one label.

Returning from Europe, Golub changed course and obtained a bachelor’s degree in fine arts in 1949, followed by a master’s degree in 1950, at the School of the Art Institute in Chicago. The first piece in the exhibition is a 1947 paper sketch, “Skull”, which depicts a stocky, monumental male head reminiscent of the primitive stone carvings of Easter Island.

Golub’s early influences included African and pre-Columbian artifacts, the classical sculpture he encountered while living in Italy, and the French artist Jean Dubuffet, who championed art by “outsiders” rather than a academic training. Rejecting the American art world‘s reverence for abstract expressionism in the 1950s and 1960s, Golub embraced figuration early on.

His paintings from this early period are on display in the Hall property’s pole barn. They explore male power in static face-on portraits, scraped in a punitive manner, such as “Head (XIV)” (1962), which depicts a Hellenistic head as mottled as corroded bronze. It is a miracle that such paintings are not really perforated, so much do they seem hollowed out. Golub adopted his scraping technique from Dubuffet, eventually preferring a meat cleaver for the job.

The violence of Golub’s technique and materials – including sketches in sanguine, chalk or clay containing iron oxide or red ocher the color of dried blood – evolves into depictions of active violence beginning in the mid-1960s. The Vietnam War was raging, and Golub and Spero, both longtime anti-war activists, joined the protests.

War, eternal and generalized, is the subject of the monumental “Gigantomachy III” (1966). On a 114 by 212 inch canvas, four men attack a fifth, who lies contorted on the ground, while a sixth passes in the distance. Their whitish, nearly skinned bodies look like ghostly afterimages, as if they were already dead, though every sinew and muscle loosens. The main attacker’s foot and leg are oddly bent and enlarged, an awkwardness that somehow increases the visual impact of the violence.

“Gigantomachy III,” in the former stable, is paired with Golub’s 1970s acrylic portraits of male public figures on linen canvas approximately 20 square inches. These lesser-known works indirectly evoke more specific political violence. Developed from news photos, each of which is dated in the title, the portraits depict a smiling Mao Tse-tung, an affable-looking General Augusto Pinochet and other powerful men – faces at odds with destruction of human life for which these dictators are held responsible. 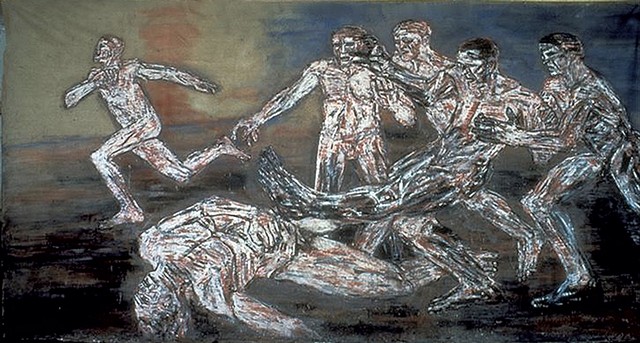 US-sponsored state violence and oppression around the world, including in El Salvador and Iran, increasingly fuels later works, in the stable. Most of these paintings, from the 80s and early 90s, are gigantic, as if to reflect the extent of the damage. Yet they only depict a few characters caught in the act or in threatening poses – a reminder that, as in Golub’s Mercenaries series, individual men do the work of the state.

These paintings are Golub’s most realistic: the figures are clothed rather than looking like flayed nudes, exchanging poised glances with each other and with visitors.

“White Squad X” (1986), which is part of a series on a blood red background, depicts a trio of men. One, blond and smiling, leans the head of a victim against the ground while holding a revolver in the other hand; his partner, with his back to the viewer, grabs the weapon at the hip and looks over his shoulder. This exemplary gaze, involving the viewer in the action, helps to account for the horror inspired by Golub’s works. Not only is the violence unavoidable, larger than life, but the aggressiveness of the perpetrators reaches the viewer’s space.

In the 1988 documentary Golubamid images of the artist and his assistants on the floor scraping “White Squad X” with meat cleavers, we hear Golub give his work some art historical context.

“If you look at Renaissance art, medieval art, Assyrian art,” he says, “it tells you a lot about who has the power and who has the baton. It’s a rapport. is a report on the way things are today.”

Golub intended his later work to be “reporting,” as he called it, of American-sponsored atrocities. “Our foreign policy is to subsidize actions like this in various parts of the world,” he says in the film. “I would say virtually every country does things like this. And the most powerful countries do it the most.

“You know that old saying,” he adds. “We have met the enemy and this is us.”