Raleigh, North Carolina – Bright, bold colors and garish patterns meet Jason Franklin as he walks into the Triangle Cultural Art Gallery for another day of classes.

The gallery, which just celebrated its third anniversary, is tucked away in a shopping center off Litchford Road in Raleigh. The bright gallery is a welcome contrast to the drab green and gray concrete of the mall.

“I wanted to create a space that would allow local artists … to have a voice, especially underserved artists,” Franklin said.

Each piece in the gallery presents a unique style, design or medium. Franklin said he was exhausted by mainstream art galleries featuring all of the same types of artwork, like landscapes and flowers.

“There is nothing wrong with that. It is beautiful. But there is so much more,” he said.

Franklin has created his own gallery to give voice to new types of artists, especially those who explore their African-American heritage through art.

“The gallery isn’t just for people like me,” he said, “it’s open to everyone. I’m just looking for a variety of work.”

Franklin carefully selects each piece for his gallery, ensuring that no artwork is alike.

While the bright, neon colors are the first thing that strikes the eye upon entering the gallery, some rooms play with muted colors. One, by Charles Joyner, is a fan of geometric shapes in black and white.

“Color is part of it, but it’s not exclusive,” Franklin.

Joyner, whose art was rife in the Triangle Cultural Art Gallery, was Franklin’s professor of design when he attended North Carolina State University College of Design.

While a few local artists are featured in the Franklin Gallery, many are from out of state. Some pieces are from artists who live in Ghana and Haiti.

Franklin, who is also an artist, founded the Triangle Cultural Art Gallery with his wife and daughter. His daughter, a businesswoman and entrepreneur, took over most of the operation.

“It has been very successful. Of course COVID-19 has hit, and it has impacted everyone. But for the most part we are doing fine,” he said.

At the back of the gallery, Franklin’s art is hidden behind his desk. Two are portraits of civil rights leaders – one of Malcolm X titled “Enlightened” and the other of Toni Morrison named “Nobel”. 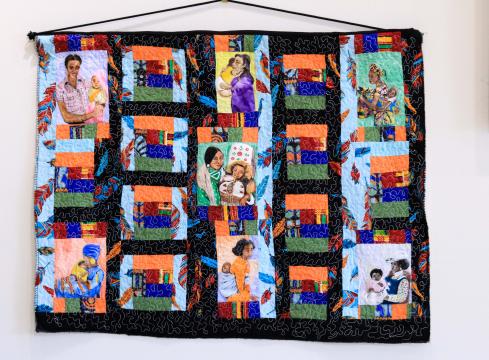 The art gallery also offers painting lessons to people from “all walks of life”. Franklin teaches people how to paint Ghanaian Adinkra symbols. Each symbol represents a bit of wisdom, a concept or a proverb in Ghana.

Franklin was introduced to symbols by Joyner.

“I fell in love with the Adinkra symbols,” he said. “It has become a novel idea as one of the things we can offer”

Students choose which symbol means the most to them and are able to learn how to paint it.

Franklin said that at the moment there are no other art galleries that focus on culture like his, but he expects more to appear in the next two. years.