Hanoi (VNA) – A pair of stone lion statues at the Ba Tam temple-pagoda complex is a symbol of the peak of stone carving technique during the Ly Dynasty, showing the craftsmen’s skill and high aesthetic sense.

The site is a well-known Hanoi relic associated with the life and career of Nguyen Phi Y Lan (Empress Mother Linh Nhan).
Landmarks in the history of Dynasty Ly were partly assigned by Nguyen Phi Y Lan – a talented woman who replaced the king as regent to look after the country. She was the pride of the nation in the war of resistance against the Tang Dynasty invaders in China, as well as the cause of building a strong country in terms of politics, economy, culture and expansion. Buddhism in times of peace.

The construction of the complex was initiated by Empress Mother Y Lan and inaugurated in March 1115.

Located next to Highway 5 with heavy traffic, the resort still retains the calm of a spiritual place.

From a distance, the complex stands out for the pure bronze statue of Empress Mother Linh Nhan Y Lan which is 9.1m tall and weighs 30 tons. Behind is a green stone relief covering an area of ​​140 m².

Entering the gate is a space bearing the impression of the Ly Dynasty style with a floating pavilion and a pair of dragon statues which were restored in 2000. 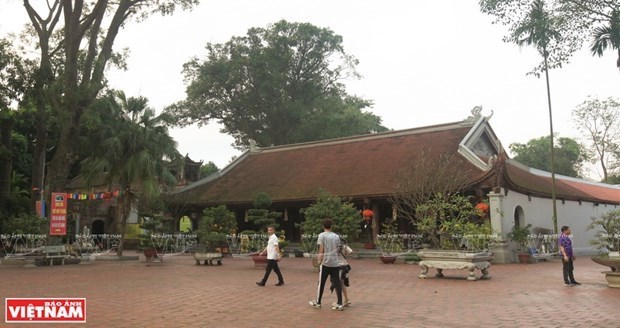 Ba Tam temple is a place dedicated to Nguyen Phi Y Lan. It was built in the Ly Dynasty style with 72 gates, the oldest type in Vietnam.

It is also frequented by visitors as it houses two National Treasures which are a pair of stone lion statues and a gilded wooden altar.

In particular, the pair of stone lions – the original artifacts associated with this relic since its construction – were carved very delicately from a block of sandstone. With a large size of 110cm high and 140cm wide, they are solemnly placed in the Buddhist trinity palace of the pagoda.

The work shows delicate carving lines, carrying the meaning of Buddhist philosophy, and at the same time clearly shows the majesty and power of a mascot in the history of Vietnamese fine art in the 12th century.

The statues are made from sandstone with skillful techniques. (Photo: Vietnam Image)

Another unique feature is the mixture of round statues and reliefs, a strength in the art of Ly dynasty sculpture.

According to Buddhism, the lion is the embodiment of intellectual power, but with stars on the body, the stone lions of the Ba Tam Temple-Pagoda also have the meaning of carrying the moving sky.

Instead of sticking to a certain pattern, the craftsmen have truly created works of art bearing contemporary hallmarks.

It requires a convergence of wisdom, imagination, affection and master craftsmanship. 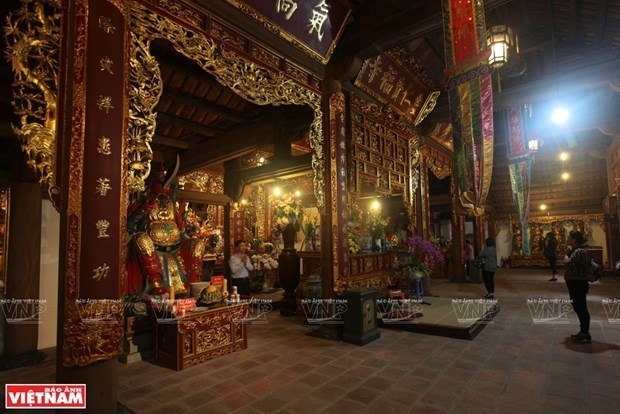 The pair of stone lions are placed in the main compartment of the temple (Photo: Vietnam Pictorial)

Another national treasure in the complex is a gilded wooden altar dating from the 16th century. As a unique original artifact, it represents the woodcarving and gilding industry of the country and the Mac dynasty in particular.

Measuring 170 cm in height and 62 cm in width, it is one of the first three known altars in the art deco style, a typical product of the traditional lacquer art of the 16th century.

In addition to its artistic value, the treasury offers a glimpse of the architectural model of the Mac dynasty, bringing national art back to its traditional essence./.